Article from the Jamestown Post Journal (http://www.post-journal.com/sports/local-sports/2017/04/latonas-walk-off-hit-in-opener-highlights-jccs-banner-day/) by Cody Crandall. 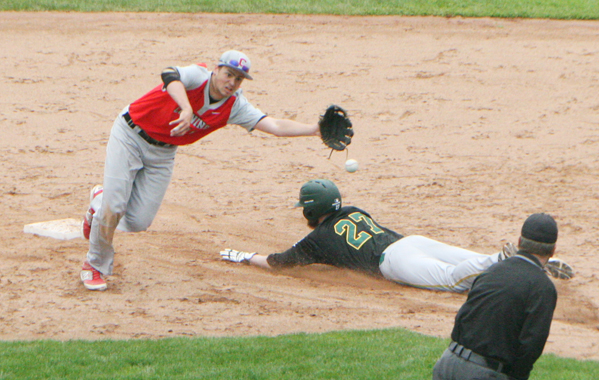 Jamestown Community College's Ryan Johnson (27) makes a successful steal of second base as the Corning shortstop lunges for the throw during the first game of Saturday's NJCAA Region 3 Division III doubleheader at Diethrick Park. P-J photo by Scott Kindberg

Keyed by a walk-off base hit by Andrew Latona, the Jayhawks escaped with a thrilling 6-5 victory in game one of an NJCAA Region 3 Division III doubleheader against Corning CC at Diethrick Park.

The Jayhawks' offense then erupted for 18 hits in the nightcap and scored in every inning en route to a 17-8 victory and an impressive sweep of the Red Barons.

"(Game one) was a very important win for us," Jamestown CC (4-8) head coach Matt Cummings said. "We didn't know the game was going to be (played) early until about 11:30 (Friday night). Getting a hold of everyone and getting them to the field on time out of our normal routine definitely is not easy. To come out and to persevere through that first game was huge for us."

Jamestown CC held a slim 5-4 advantage heading into the top of the seventh, but Corning was able to tie it up thanks, in part, to a lead-off single from Junior Jimenez, who came around to score later in the frame after narrowly beating a throw to the plate. 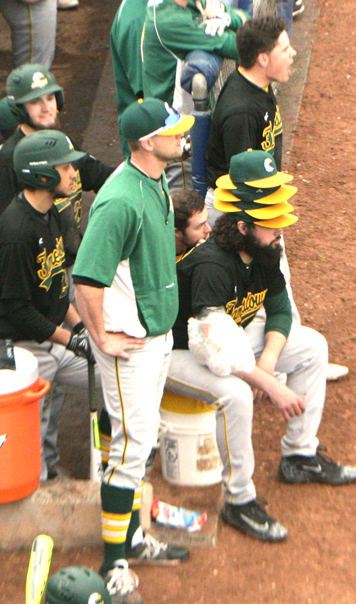 In the bottom of the seventh, Jose Pena got the Jayhawks' rally started with a one-out walk. Nelson Rivera pinch ran for Pena at first base and advanced to third after Noah Whalen doubled just past the diving try of the Corning third baseman.

Corning pitcher Donovan Arroyo was able to induce a popout for the second out, which ultimately set the stage for Latona's late-game heroics.

The Jamestown High School graduate laced a line drive into the right-center field gap, plating Rivera and sending the Jayhawks into a raucous celebration.

"That was a tremendous hit by (Andrew)," Cummings stressed. "And what perseverance. And it really shows his maturity as a young man. He had an error earlier in the game in left field and then that very same inning, he ends up throwing a guy out at second base. That was a huge play, too. And then he keeps on persevering. … When his number is called, he just performs. And that's just a testament to how hard that young man works."

Corning CC jumped out to a 1-0 lead in the top of the first, but the Jayhawks batted around in the bottom portion of the frame and scored four runs to take a 4-1 lead. 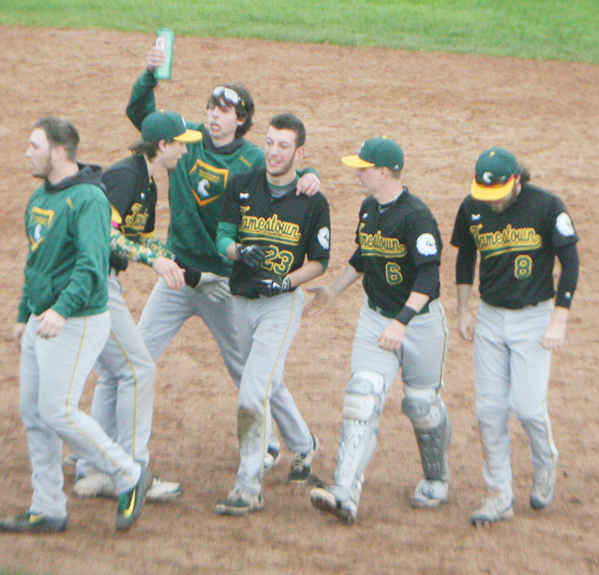 Jamestown Community College's Andrew Latona, No. 23, is mobbed by teammates after ripping a game-winning hit to send the Jayhawks to a 6-5 NJCAA Region 3 Division III baseball victory over Corning CC in the opener of a doubleheader Saturday afternoon at Diethrick Park. P-J photo by Scott Kindberg

The offensive outburst was highlighted by RBI doubles from Noah Weinstein and Matt Hair and a run-scoring single from Steve Krystofiak.

Jamestown CC added an insurance run in the fifth when a runner crossed the plate on an error.

The Red Barons, behind three hits from Dominick Teoli and two hits from Joshua Kirkwood, chipped away at their deficit throughout the contest and managed to tie the score at 5-all when down to their final three outs, but just couldn't find a way to edge ahead late in the game.

Daniel Recinos, who is from Guatemala, got the start on the hill for the Jayhawks in the first game and worked 3.1 innings and struck out two. Jamestown native Chad Nelson tossed 2.2 innings of relief while Josh Jones also saw time on the mound. 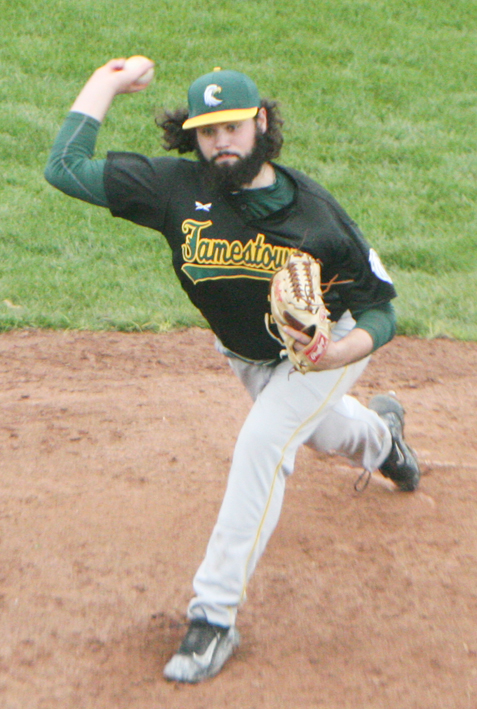 Corning CC again jumped out to a lead in the second game.

Philip Derick got things started with a lead-off double, Jimenez followed with a booming RBI triple and Jimenez later scored on a groundout off the bat of Austin Locke to stake the visitors to a 2-0 advantage.

From that point on, however, it was all Jayhawks.

Not only did the Jayhawks put up at least a run in every frame, but every starter in Jamestown CC's lineup had at least one hit.

Latona carried the momentum of his game-winning knock into game two and he led the offensive onslaught with four hits. Third baseman DJ Yates ripped three hits while Weinstein, Krystofiak, Bryce Sherrard and Whalen all contributed two hits. In addition, Hair and Pena both tripled and Cameron Haberberger doubled.

"Today was a day for a lot of hits," Cummings emphasized. "It was fantastic to see our offense come up with those hits and finally have the bottom half of our order produce a little more. … In game two, the bottom half finally caught up with the top half of our lineup and it always seemed like whenever (Corning) would put something up (on the scoreboard), we never panicked, we just stuck with the game plan.

"We've had a couple kids struggling so far who are very close to breaking out," Cummings continued. "It's just a testament to these kids working their tails off in practice, in the cage and when their opportunity comes, they make the most of it."

Brocton native Ryan Johnson was the starting pitcher in game two for the Jayhawks and worked 3.1 innings before John White relieved him. White fired the final 3.2 innings and struck out five.

Jamestown CC, which has now won three of its last four games, will next be in action Tuesday in a doubleheader back at Diethrick Park against Niagara County CC.

"Today was the two most important games on our schedule," Cummings stated. "We take everything one day at a time and today was a huge day for us. We got some nice momentum going into Easter Sunday. Guys get to relax and go home and see their families. And then we're back at it at home against NCCC."