Article from the Jamestown Post Journal (http://www.post-journal.com/sports/local-sports/2017/04/jayhawks-sweep-broome-cc/) by Cody Crandell 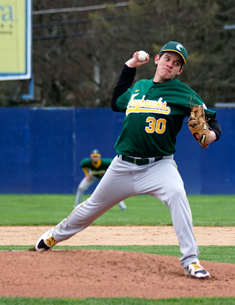 The Jamestown Community College baseball team had its back against the wall late Saturday afternoon.

In fact, the Jayhawks were facing a 6-4 deficit heading into the bottom of the sixth inning of game two of an NJCAA Region 3 Division III doubleheader against Broome CC at Diethrick Park.

But sparked by an RBI single from Andrew Latona, an RBI base-hit bunt from Cameron Haberberger and a go-ahead two-run single from Noah Weinstein, the Jayhawks put up a four-spot in the decisive sixth frame and ended up coming away with an 8-6 victory and a sweep of the pesky Hornets.

In game one, the potent Jamestown CC (6-10, 5-7) offense erupted for seven runs in the first two innings and the Jayhawks rode the red-hot start and the stellar pitching of Daniel Recinos to an eventual 10-0 win in six innings.

"These kids, they just don't give up," Jamestown CC head coach Matt Cummings explained. "They don't care what the score is, they don't care how much they are down, they're just great baseball players. They love showing up to the ballpark and just putting the work in. And again, if I said it once, I'll say it again, it's great perseverance." 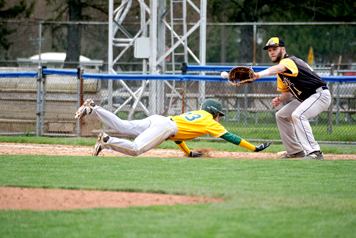 Jamestown CC's Andrew Latona dives back into first base during the second game of a doubleheader against Broome CC on Saturday at Diethrick Park. Photos by Jake Steinhoff | Jamestown CC Athletics

Noah Whalen got the late-inning rally started in the second game, when he worked a one-out walk. John White — who ripped an RBI single to tie the game at 4 in the fourth inning — then singled to put runners on first and second, which set the table for Latona, Haberberger and Weinstein.

"That's huge," Cummings stressed when asked about his team's poise at the plate late in the contest. "Going into the bottom of the sixth, we're down two, so we're looking for base runners, you know? One run is not going to do it. So for us to change our approach at the plate … and for a couple guys to string together a couple good hits … that's just great execution."

Broome CC (2-17, 2-9) plated two runs in the first inning against Jamestown CC starter Chad Nelson, but the Jayhawks responded right back with three runs of their own in the bottom portion of the frame to take a slim 3-2 advantage.

Thanks to a run scoring on an error and an RBI ground out from Brady Harrington, the Hornets were able to regain a 4-3 lead in the top of the fourth before White's base hit knotted the score right back up.

Keyed by several walks and a bunt single from Justin Perez, Broome CC was able to take another slim lead, 6-4, in the top of the fifth, but the Hornets just weren't able to hold of the relentless Jayhawks. 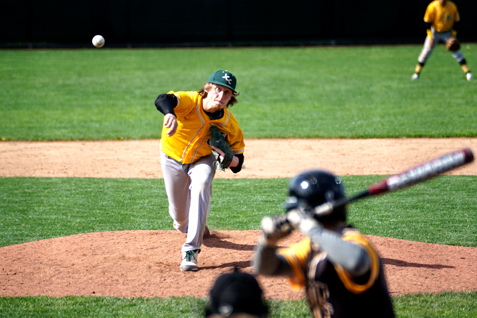 Above, Jamestown CC's Steven Krystofiak delivers to the plate during the second game of an NJCAA Region 3 Division III doubleheader against Broome CC on Saturday at Diethrick Park. Photos by Jake Steinhoff | Jamestown CC Athletics

White ended up with three hits in the win while Weinstein and DJ Yates contributed two hits apiece.

Nelson, a Jamestown native, worked the first four innings and struck out six before he was relieved by Parker Burnette, who threw one inning out of the bullpen. Steve Krystofiak then came on in relief of Burnette and was extremely effective over the last two innings on the hill and he struck out two.

Kyle Balmer had two hits in defeat in the second contest for the Hornets.

Right from the jump in game one, the Jayhawks made a concerted effort to be aggressive at the plate and on the bases.

Haberberger ripped a one-out single in the first, stole second and third, and then crossed the plate on a booming RBI double from Weinstein. Later in the frame, Weinstein scored on a base hit from Matt Hair, which gave the hosts a 2-0 lead. 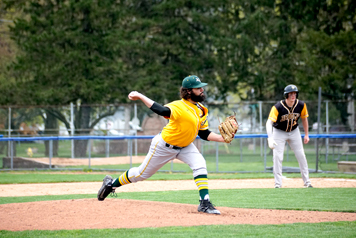 Then in the bottom of the second, Jamestown CC scored five more times to put the game out of reach.

The offensive outburst was highlighted by run-scoring hits from the likes of Latona, Haberberger and Yates.

Jamestown CC added two more insurance runs in the fourth, courtesy of RBI doubles from Haberberger and Weinstein, and the final Jayhawks run scored in the sixth, when another base hit from Weinstein plated Haberberger.

Weinstein, who entered play Saturday leading the team in batting average (.489), hits (23) and RBIs (17), continues to be a major threat in the middle of the Jayhawks' order.

"We go as he goes," Cummings stated. "He's a force back there behind the plate (at catcher), he's our rock. We go as he goes defensively and obviously on offense, he's seeing the ball great. The biggest thing he's doing well is he's just staying within himself, he's not trying to do too much. He's just getting base hits for us and it's huge."

In addition to the superb production at the plate from Weinstein, Haberberger ripped three hits in the game one victory.

While Jamestown CC was having a field day at the plate, Recinos was doing a masterful job of keeping the Hornets off-balance on the hill.

The freshman right-hander from Guatemala ended up hurling five shutout innings, striking out three and walking none.

"Another great outing from Daniel," Cummings said. "Very dominant, hit his spots and kept hitters off-balance today. … He pounds the zone, he pounds the zone all game long. He forces the offense to put the ball in play and we have solid defense behind him. It's a team game and Daniel understands that and knows how to pitch to contact and he does a great job doing it."

The Jayhawks will look to keep things rolling today, as they hit the road for another doubleheader against the same Broome CC team.

"It's very important to us," Cummings emphasized. "From here on out, every game is a playoff-type atmosphere. So we have to approach it in that way. We still have two more tough games (today) on the road at Broome. So, they're not going to lay down and give us anything. We've got to get up and take it."